Over the weekend something on the ground caught my eye. It looked like a piece of garbage but on a closer inspection turned out to be something more interesting. It was a piece of porcelain.

Being a minimalist, the idea of having a china cabinet in my home is appalling and has never interested me in the slightest. However, finding some china in the middle of a field with seemingly nothing nearby piqued my interest. Come to find out I was standing on a town site that had washed away 160 years ago.

Champoeg (pronounced shampoo-EE), originally home to the Kalapuya Indians who were removed to the Grand Ronde reservation circa ~1856, was founded by Robert Newell and Andre Longtain in 1844. The town site was surveyed by Jessie Applegate around the same time period (if his name sounds familiar it’s because he also surveyed the Oregon City Claim). S. D. Snowden was enlisted in 1852 to survey the townsite and it was recorded in Marion county in 1853.

I’ve overlaid the some of the old Champoeg town plats and claims in the map below. 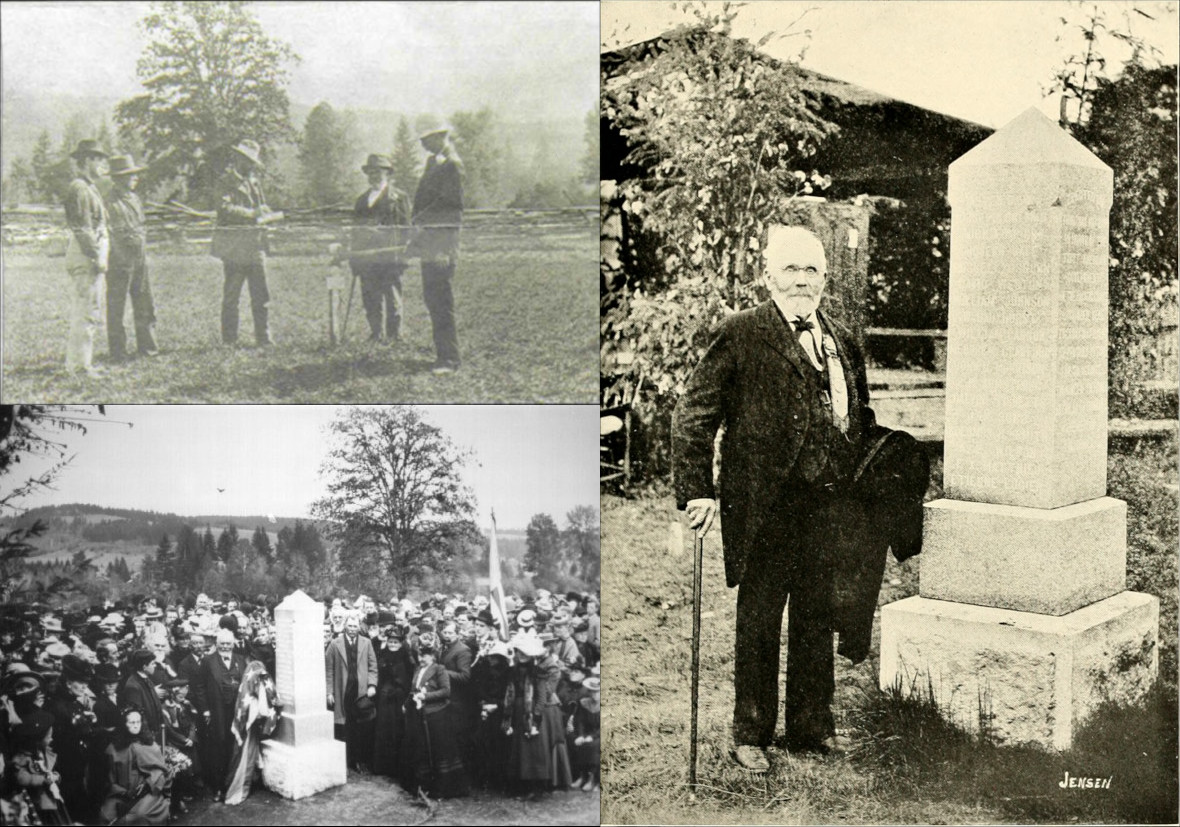 In 1861 the Willamette River flooded and washed away the town site. There were some meager attempts to rebuild but with the advent of the rail and subsequent floods it never fully recovered.

In 1913 Champoeg was established as a “Provisional Government Park” and subsequently a state park in 1943. The visitor’s center was built in 1977 on the site of Donald Manson’s house. His barn, which had been built in 1862 using reclaimed timber from the flood, was restored in 1992.

There were a variety of archaeological digs and surveys started in the 1960’s from a commissioned study of the park by John A. Hussey at the request of the Oregon State Highway Commission and Oregon Historical Society. Initial archaeological work was done by Paul Nesbitt and subsequently John Atherton and David Brauner

Here are a few references to some of the more notable digs.

Now that we’ve established the local history, let’s plot the location of where I found the porcelain and see how it comes together. The left side is imagery from 2014 and the right side is imagery from 2019 - you can slide it back and forth to compare the most recent dig site before and after it was buried. As you can see it’s right next to what was determined as the original Newell Homestead.

With the help of the local mole-people in bringing the porcelain to the surface and the proximity to the most recent archaeological dig, odds are pretty good the porcelain isn’t from someone’s recent picnic. There is some recent academic literature detailing the discovery of the Newell Homestead by Mollie Manion in 2006 and 2014

For more reading here’s a 1986 dissertation by Lou Ann Speulda Nicholls and another from 2019 by Cayla Hill.

Harriet Munnick, who was a party in the 1973 dig, wrote a book all about transfer printed earthenwares in the French Prairie. Some of her collection can be viewed online at the St. Paul Mission Historical Society

I left the porcelain in place and notified the state park rangers to contact the appropriate people to collect it. Maybe there is a plate in the OSU archives that is missing a piece the exact same shape and size of the piece we found.

What started out as a weekend walk turned into an interesting trip deeper into Oregon’s history. I’m sure it won’t be the last. For the record, I still have no interest in owning a china cabinet - it belongs in a museum.